Vaping / e-cigarettes and Driving – Is it illegal to vape and drive? 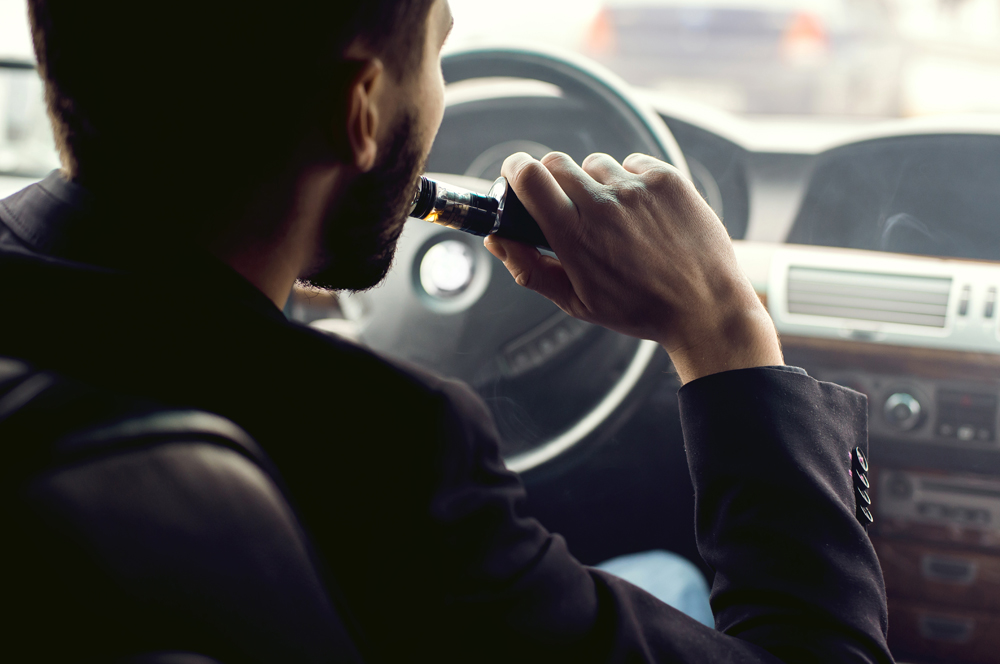 Is it illegal to vape and drive?

If a police officer deems a driver of a vehicle to be distracted by the e-cigarette they could be charged with driving without due care and attention (otherwise known as careless driving) and receive three to nine penalty points on their driving license, a fine or disqualification.

If you are stopped by the police, it is important you contact Driving Solicitors to discuss your options in more detail.

Police are warning motorists who smoke e-cigarettes while driving (also known as vaping and driving) that they risk losing their driving licence if their vision is ‘obscured’ by clouds of vapour.

Although as the law currently stands, vaping and driving is not in itself illegal, police are saying an e-cigarette will be treated the same as any ‘handheld electronic device’.

As such, motorists who are distracted by them, or the clouds of vapour they produce, could face prosecution for driving without due care and attention.

Road Traffic Officer Sergeant Knapp stated: “The smoke caused by vapes are a distraction and the consequences of them can be dire, all it takes is a moment to become distracted and potentially cause a crash and even worse, a fatality”.

A spokesman for the Department of Transport stated: “We believe that drivers should always follow the rules set out by the highway code and must always exercise proper control of their vehicle and avoid any distractions, including vaping.”

Kevin Clinton, head of road safety at RoSPA, said: “Vaping while driving could easily impair a driver’s ability to drive safely, which could increase the chances of crashing.”

A spokesman for the Department of Transport said: “We believe that drivers should always follow the rules set out by the highway code and must always exercise proper control of their vehicle and avoid any distractions, including vaping.”

It is thought that over three million people in England and Wales now use e-cigarettes. A majority of them are driving vehicles.

Sergeant John Davis of Surrey Police stated: “Any person who is distracted in any way could be guilty of an offence – whether that be smoking, vaping or eating.”

He went on to say: “With regards to a scenario where someone could potentially be either distracted or have reduced visibility then there is potential for a crash but it’s certainly not something we have come across – whereas mobile phone distraction is a regular distraction that we come across in fatal/serious collisions.”

The Independent news paper stated that road safety charity Brake have spoken about the use of vapes while driving:

“Driving is the most dangerous thing most of us do on a daily basis; it is a complex task, that requires your full attention to do so safely,” a spokesperson said.

“Vaping while driving increases your risk of crashing, causing visual disruption and physical and mental distraction. Attempting any type of activity that takes your eyes off the road increases your chances of causing a crash, and killing or seriously injuring someone.

“Our roads are busy places, and we would urge drivers to keep their eyes on the road and hands on the wheel.”

If a person drives a mechanically propelled vehicle on a toad or other public place without due care and attention, or without reasonable consideration for other persons using the road or place, he is guilty of an offence.

Meaning of careless, or inconsiderate, driving:

This section has effect for the purposes of sections 2B and 3 above and section 3A below.

A person is to be regarded as driving without due care and attention if (and only if) the way he drives falls below what would be expected of a competent and careful driver.

In determining for the purposes of subsection (2) above what would be expected of a careful and competent driver in a particular case, regard shall be had not only to the circumstances of which he could be expected to be aware but also to any circumstances shown to have been within the knowledge of the accused.

A person who causes the death of another person by driving a mechanically propelled vehicle on a road or other public place without due care and attention, or without reasonable consideration for other persons using the road or place, is guilty of an offence.

It is important you do not ‘vape and drive’. You may find yourself before the court, or worse.