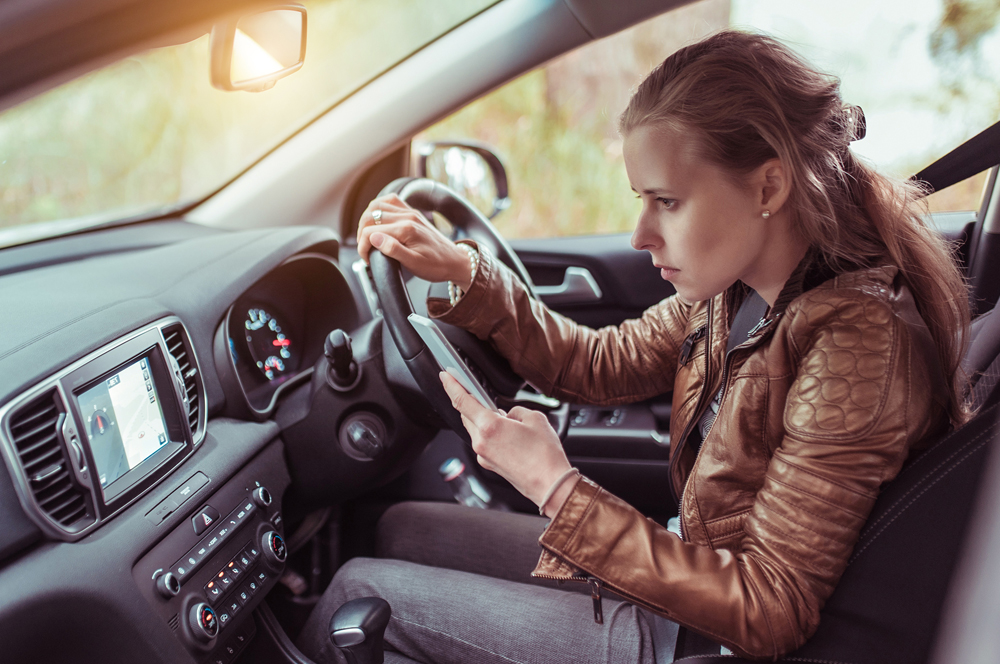 The new device, created by technology firm Westcotec, determines how many cars on a stretch of road have mobile phones being used without a hands-free kit. If the device identifies a mobile phone being used, it will flash a mobile phone symbol at the vehicle to advise the driver to stop using their mobile phone. A spokesman for the two forces said: ‘The technology can detect when Bluetooth is being used but cannot detect if a passenger is using the phone, but the sign will still be activated reminding motorists of the distraction of a mobile phone whilst driving.’

Despite this new technology being used as an enforcement tool, Thames Valley Police said officers will be out on patrol ready to stop any motorists they find making calls or texts while driving. But the main aim of this new technology is that it will educate motorists on the potential risks of driving whilst distracted.

The new device will be first used on the A34 dual carriageway in Oxfordshire before being used across the rest of the Thames Valley and Hampshire police force areas. According to Thames Valley Police, the A34 is a particular “hotspot” for drivers using their mobile phones whilst driving. The two detectors, which cost £6,000 each, will be posted at different locations throughout the Thames Valley and Hampshire to start – but more could be rolled out. If the device proves to be successful, it will be used by more police forces in the future.

The police’s release of this new technology is supported by families who have lost a loved one due to a driver being distracted by a mobile phone whilst driving. Kate Goldsmith lost her daughter Aimee Goldsmith after a lorry driver crashed into the car she was a passenger in. The lorry driver was using his mobile phone to change music whilst driving. The eleven-year-old was killed along with her stepbrothers Josh Houghton and Ethan Houghton, aged eleven and thirteen, and the brothers’ mother Tracey Houghton, aged 45. Ms Goldsmith said:

‘I am supporting this campaign and welcome any technology which can assist in educating people and stop them from using their mobile phones whilst driving. ‘My daughter’s death was completely avoidable. Please don’t use your mobile phone whilst driving, it’s not worth the risk.’

While the Hampshire and Thames Valley forces are the first in the UK to deploy the system in public campaigns, other services have trialled the tech. In July 2018, Norfolk County Council began testing mobile phone detectors in Norwich, to help local police determine where mobile phone usage whilst behind the wheel was most predominant.

The new technology made to tackle the growing problem of drivers using mobile phones whilst at the wheel comes after a big change in legislation in 2017. In March 2017, new procedural legislation was introduced to the United Kingdom to act as a strong deterrent for drivers who use their mobile phones whilst driving a vehicle. The penalties for driving with a mobile phone were increased from a £100 fine and three driving points to a £200 fine and six driving points on the offender’s licence.

Despite the new technology, there are limitations to the system that question how effective it will be. For example, while the new technology is able to detect a signal from a mobile phone in a car, it can’t figure out who in the vehicle is using the phone. This means that the warning signal will be triggered if a passenger is using their mobile phone, not the driver. To combat this, the technology has been made so that it can detect if a phone call is being made through the handset, or via Bluetooth equipment, for example a built-in hands-free system or a wireless headset.

Pete Williams, a spokesman for road safety for the RAC said that:

‘Driving and using a handheld phone do not mix, it is an incredibly dangerous and distracting combination. We welcome this technology as it will hopefully make drivers think about what they are doing behind the wheel, and encourage some to put down their phones and concentrate fully on driving. While it will no doubt be argued that the technology cannot yet definitively detect drivers that are using handheld phones illegally, we are aware of camera equipment being trialled in other countries which can.’

The Police’s advice is that a driver should turn off their phone whilst driving, put it out of reach and out of view, such as the glove compartment, so that it cannot be a distraction for drivers and won’t risk the lives of the innocent. It is also worth remembering that motorists can receive an on the spot fine of £200 and six penalty points on their licence. Drivers can also be given a driving ban and a court summons for this offence.

If you would like more information on the newspaper articles, which have been used in this blog, please look at the following weblinks:

Due to changes in law, police enforcement and handling of drivers who use their mobile devices whilst driving, it is important that you seek correct and professional legal help. This offence is very serious and has been made even more so with the recent media attention on this issue. It is easy to get caught out using a mobile phone whilst driving, whether it was to simply check your navigation system on the device or any other multitude of reasons. It is also easy to feel overwhelmed by the situation. Here at Driving Solicitors, we can offer you the help you need. So, if you have been charged with driving whilst using a mobile phone or device, it is important that you get the expert legal advice that we can offer you with our specialised driving solicitors. Please do not hesitate to contact Driving Solicitors on 0203 488 2551 and get expert legal advice from a specialist motoring solicitor today.