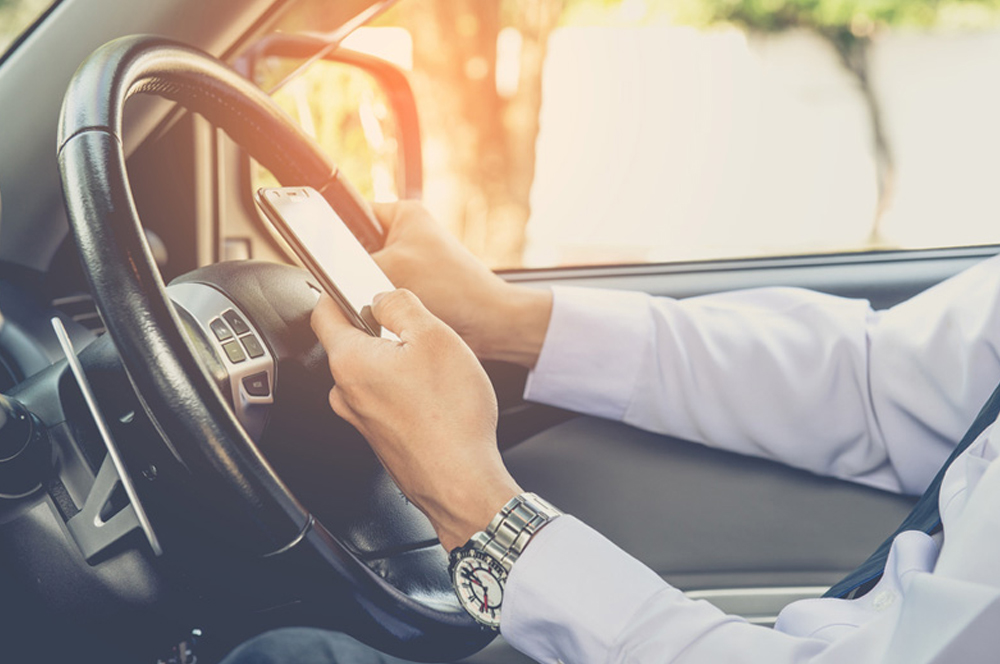 Driving or riding a motorcycle whilst holding a mobile phone has always been regarded as a serious offence. However, in recent years there has been a national campaign to crack down on the number of motorists who use handheld and/or mobile phones whilst driving. This is evident through the changes to legislation and procedure when it comes to dealing with a driver who was using a mobile phone. The law states that it is the “use” of a mobile phone that is illegal. This includes texting while driving or riding a motorcycle, using any other Apps, or messenger services that allow you to communicate with other people. This offence is not just using your mobile as a phone to talk to people while driving.

In 2017, the penalties for driving with a mobile phone were increased from a £100 fine and three driving points to a £200 fine and six driving points on the offender’s licence. This means that for new drivers, drivers who have held their driving licence for two years or less, being on the mobile phone whilst driving can result in their licence being revoked and receiving a driving ban for just one offence. This is because they would have received six driving points in the first two years of holding their licence, whereas it used to be twelve points in the first two years of holding a driving licence before a driver’s licence was revoked or put on a driving ban. It is also possible that the defendant will be taken to court where they might receive penalties such as being banned from driving or riding a motorcycle and can get a maximum fine of £1000 fine, or £2500 if the driver was driving or in charge of a lorry or bus.

The new campaign, started in around March 2017, which is attempting to stop mobile phone usage whilst driving reinforces the 2003 legislation, stating that it is illegal for a motorist to touch a device, follow a map and send a text whilst driving, even if the vehicle is stationary at a set of traffic lights or waiting in a queue as the vehicle’s engine is still running. This means that it is only legal to use a mobile phone whilst driving when the vehicle is safely parked, and if the driver has to call an emergency number, being either 999 or 112, and it is impractical or not safe for the vehicle’s driver to stop at its current location.

The 2003 legislation also deems that motorists can be penalised for using the mobile phones whilst in the passenger seat. This is applied to if the passenger is giving instructions or a lesson to the driver. This is because the registered driver takes responsibility for certain driving offences when teaching a learner, even if the registered driver is not driving themselves.

It is also important to note what the 2003 legislation states about hands free devices. A hands-free device includes a phone that is connected to your car by Bluetooth, a Bluetooth headset, voice command, a dashboard holder or mat, a windscreen mounted sat nav or mobile phone and a built-in sat nav. The legislations states that the use of hands free devices is legal as long as the driver does not touch or pick up the phone or device at any moment.

For a driver, or motorcycle rider, to receive a charge for driving, or riding, with a mobile phone, the prosecution has to prove beyond reasonable doubt that the driver, or rider, was actually operating a motor propelled vehicle with a mobile phone device in his or her hand, and that it was in use. Again, the word “use” includes using the device for any telecommunication purpose, not just receiving or making calls. However, it is possible to cast doubt over a prosecutions allegations in order to avoid a hand-held phone related driving offence.

It would also help the defendant’s case if they were able to exhibit his or her call records of the mobile phone. This would show that there were no calls or texts, etc, made or received around the time of the alleged driving offence. However, please bear in mind that if the defendant has been caught using a hand-held phone, or texting, whilst driving or riding, quite often the police will not be interested in gathering potential relevant evidence of the offence since the defendant was caught in the act. This potential relevant evidence can include your call or data usage records, or evidence that you had made or received text messages or communications via other messenger apps, Facebook, WhatsApp, SnapChat, Twitter and any other apps.

Also, sometimes police officers will refuse to look at the defendant’s device usage history in order to verify your call records. However, this can be used to a defendant’s advantage at court. This is due to the fact that a police officer is under a duty to carry out a proper investigation. He or she is required to look for both evidence that points towards a driving offence, of hand-held usage whilst driving, having been committed and evidence that points away from a driving offence being committed. When the officer is cross examined at the courts, it should be put to him that he was offered the opportunity to check the phone records and texting history but failed to do so. This means that the officer therefore failed to find evidence that both proved and disproved the alleged driving offence.

It is important that if you are accused of driving with a mobile phone that you seek the correct and professional legal help to assist you with your defence and through the legal process. So, if you have been charged with driving with a mobile phone and feel that you have been wrongly accused, do not hesitate to contact Driving Solicitors on 0203 488 2551 and get expert legal advice from a specialist motoring solicitor today.